Biore recently reformulated the widely beloved Biore Aqua Rich watery Essence and Biore Aqua Rich Watery Gel released in 2015. I’ve been using the 2017 versions of the essence and gel for a few weeks now and wanted to summarize my thoughts along with answers to questions I’ve been asked about the new formulations all in one spot. This is kind of a text heavy post, so here’s a table of contents if you’re only interested in specific information: 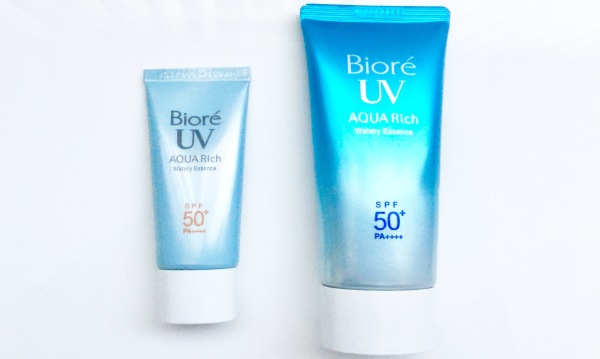 I need to come clean about something before we begin – I’ve gone through at least half a dozen tubes of the normal (citrus scented) 2015 Biore Aqua Rich Watery Essence since its release, but I finished my last tube of it a good six months ago and haven’t repurchased. More recently, I’ve been using the limited edition rose-scented version, but to my knowledge the two sunscreens are identical in everything except scent (someone correct me if I’m wrong). Also, for purposes of this review I went out and bought a 15ml baby tube of the 2015 essence. LOOK HOW CUTE IT IS! The formula in the baby tube feels the same to what I remember the original version to be, so I will be using that to jog my memory and also for comparison pictures.

Differences are entirely with the inactive ingredients in the sunscreen. Here are the ingredients that are different from one formulation to the other. The differences presumably make this sunscreen water and sweat resistant.

I’ve been using the 2017 Biore essence on and off for almost 4 weeks. Here are my observations, in no particular order:

2015 Essence swatched on the left. 2017 on the right. The 2015 essence is a little more white in color but otherwise, they look very similar. The 2017 essence is definitely stickier, but capturing that on camera is challenging.

To summarize, the 2017 formulation of the essence is a noticeable step down in terms of cosmetic elegance, which is particularly annoying because it is still very much an “indoor” sunscreen despite the efforts to make it sweat and waterproof. That said, I don’t hate the 2017 version and find it very serviceable for every day use. It’s a bit stickier than the previous version, but still has the appreciable lightness and easy finish that Japanese sunscreens are known for. My feelings towards this reformulation are akin to my feelings about the 2003 McNuggets reformulation – the all white meat McNuggets are definitely not as good as the original McNuggets, and every once in awhile the memory of the McNuggets from the good old days makes me sad, but I still eat a lot of McNuggets because I still like them. With the 2017 essence, I don’t have plans to repurchase (I also wouldn’t repurchase the 2015 essence though, to be fair) but if someone handed me a tube I’d happily use it up.

Where to Purchase the 2017 Biore Watery Rich Aqua Essence

I purchased my tube of the 2017 Biore Watery Rich Aqua Essence from Amazon JP, but it seems like Amazon JP is no longer shipping it internationally due to the alcohol content. It is also available on Amazon US, Ebay, or Rakuten. You can also try searching “ビオレＵＶ アクアリッチウォータリーエッセンス” on other Japanese sites.

I mentioned in my comparison review of the 2015 essence and gel that I prefer the gel, so whereas I was fairly calm about the essence being reformulated I was much more anxious to see what they did with the gel. Spoilers: the new version sucks.

There are only a handful of differences in inactive ingredients:

I’ve gone through probably 15+ tubes of the 2015 gel. It was my go-to sunscreen for a very long time. I received the 2017 gel a month ago and have used it 5 times, which admittedly is not very many, but I really do not like it. Here are my impressions: 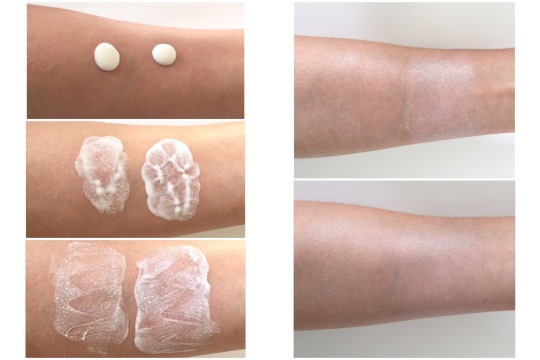 On my forearm, the 2015 Biore Aqua Rich Watery Gel is on left and 2017 is on right. As you can see, the texture of the 2017 gel is thicker and whiter than the 2015 gel, and leaves a white cast that is very noticeable at first, fades, but is ultimately still a little noticeable.

This is not the worst sunscreen and part of me feels like I’m being extra-critical of the 2017 gel because I was so attached to the 2015 version, but I’ll put it to you like this: I find the 2017 gel to be less pleasant to use than the Japanese sports-sunscreens I’ve tried, namely Sun Bears Super Strong Plus and Sunplay Superblock (neither of which budge, even after soak in a swimming pool for an hour, btw) while offering inferior protection. Therefore, I just don’t see the point of the 2017 gel and do not see a scenario where I would ever want to use it.

Where to Purchase the 2017 Biore Watery Rich Aqua Gel

I purchased my tube of the 2017 Biore Watery Rich Aqua Gel from Amazon JP, but Amazon JP is no longer shipping it internationally due to the alcohol content. It is also available on Amazon US, Ebay, or Rakuten. You can also try searching “ビオレ UV アクアリッチ ウォータリージェル” on other Japanese sites.

Sunscreens I Like Better Than the 2017 Essence and Gel

Generally speaking, water and sweat resistance is a move in the right direction, but with these 2017 releases Biore seems to have compromised the skin-feel of these sunscreens without adding much function because they are still not robust enough to use for outdoors, water-heavy, or sweat-heavy activities. With the essence, I feel like the reformulation is inconvenient but not a definite deal breaker. If you enjoyed the 2015 version, there’s a good chance you can learn to enjoy the 2017 version after an initial adjustment period. The gel on the other hand no longer possess any of the qualities that made it a pleasant to use sunscreen in the first place.

If you are disappointed by the reformulations and are at a loss of what sunscreens to use next, I have more than a few suggestions, all very affordable, relatively easy to purchase, SPF50+ PA++++ of course! 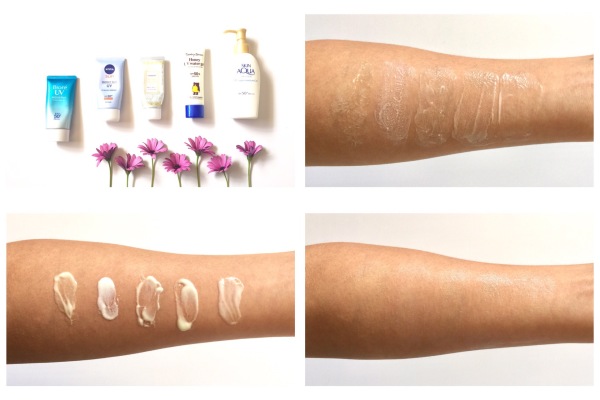 2017 Biore Essence on the left. Alternative sunscreens, organized L-R in my personal order of preference, on the right.

This has been my favorite and most regularly used sunscreen for awhile. This sunscreen is versatile enough to use year round – I have dry skin and don’t find it drying at all, even during winter. Meanwhile @thebeautyimprint (who gets credit for putting this sunscreen on my radar in the first place) has oily skin and has mentioned that she finds it mattifying, especially during summer. The one negative is doesn’t dry as lighting-fast as the 2015 Biore Aqua Rich sunscreens, but it does contain enough alcohol to dry in a respectable amount of time. The texture is more creamy, less silicone-y, yet it still looks fantastic under makeup and is less prone to pillage than any other sunscreen I’ve used. While it does leave a white sheen initially, it fades once the sunscreen absorbs (in the swatch above, I couldn’t even capture it). Did I mention it’s cheap and readily available? I see it on amazon for <$8 pretty regularly but would be happy to pay much more if I needed to. I don’t like using the term HG because I get bored of things too easily to proclaim that kind of devotion, but this has been my go-to and favorite sunscreen for a few months and the love is only growing stronger.

I reviewed this in full here so I’ll keep this short. The light, weightless, gel texture of this is pretty similar to the 2015 Watery essence. It’s silicone based but the finish feels less silicone-y than the Biore essence. No white cast, despite the zinc oxide content. One downside (or upside, if you’re anti-alcohol) is that this is alcohol-free, which means you’ll have to give it a good 5-10 minutes to dry, but otherwise, this is a really lovely sunscreen.

This is almost identical to the Canmake Mermaid Skin Gel but dries faster (positive) and with an added honey fragrance (negative, IMO). I’ve read this was a limited edition release last year, but I’ve also seen it coming back in stock on a few Japanese sites so maybe it’s becoming a permanent edition? Might be a good idea to stock up if you end up liking this.

Reviewed in full here. This has the texture of a semi-creamy but very fluid gel. Compared to the Biore Aqua Rich Watery Gel and Nivea Sun Protect Watery Gel, I would say this sunscreen is a tiny bit thicker but still thinner than an essence-type sunscreen would be. It’s completely white cast free and glides easily over skin but is a little sticky, although not any stickier than the reformulated Biores.

Disclaimer: All products featured in this post were purchased by me. All opinions expressed are my own. This post contains affiliate links. Purchasing an item through an affiliate link does not add any cost to the customer but does help support this site’s upkeep.

31 thoughts on “2017 vs 2015 Biore Watery Rich Aqua Gel and Essence: Comparison Review & What Sunscreens You Should Use Instead”