I used to swim 2 hours a day, 11 months out of the year, and I played water polo before my high school even had a team, so when I moved to Southern California and decided to take up surfing, I assumed it would come naturally. I have probably a record number of battle scars from playing little league as a kid, but in water? Pffft. I’m practically a mermaid!

Turns out, swimming in the ocean is totally different than swimming in a pool, and I’m considerably worse at it than I care to admit. Something about the salt and lack of lane lines throws me for a loop, although I’m convinced if I could only wear goggles while surfing, I would be at least 300% better at it.

In a way, CosRX snail essence is the ocean to CosRX snail cream’s pool. My skin loves snails and specifically, my snail loves the snail cream. They’re practically the same product yet my skin refuses to love this essence, despite my many efforts. It just doesn’t make any logical sense!

The Claim
This Advanced Snail Gel Lotion is protects skin from moisutre loss and keeps skin smooth, and healthy without the use of heavy oils.

Where does it fit in your routine?
This is an essence but due to its thicker texture, follow the thin to thick rule when applying. I usually apply this after other essences and toners but before emulsions or creams.

Size and Price
This bottle contains 1o0ml of product. I purchased this as part of the Fiddy Snails set at Memebox (now sold out). It is also available individually for $18, or on Amazon for $17.98, RoseRoseShop for $11.50 (plus shipping), or Jolse for $16.50.

Packaging
This comes in a plastic bottle with a pump dispenser on top. The set I got it in also came with two sheets of awesome CosRX stickers. I highly recommend getting some CosRX stickers whenever you have the chance!

Color and texture
This essence is completely clear and has slimy, mucus-y texture, like, well, snail slime!

The ingredient list is simple and this essence boasts the highest amount of snail secretion filtrate I’ve seen in any product. If you’re trying to find something as close to pure snail as possible, this is probably what you want! 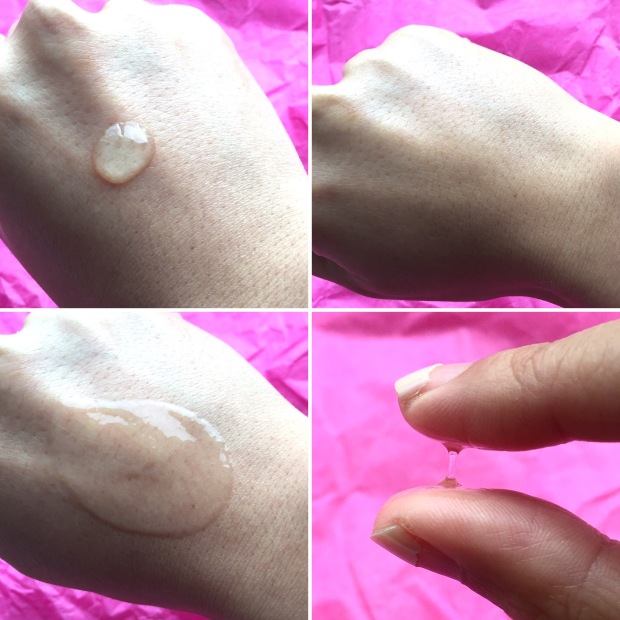 As mentioned earlier, this essence has a very slimey and mucus-y texture. I follow the instructions and apply heavily to my cheeks and lightly to my t-zone. The CosRX snail cream is mucus-y as well, but feels more whipped in comparison. It certainly feels nice, like a gluey gel, takes a minute to sink in, but once in doesn’t leave a film or residue on my skin.

Unfortunately, this essence doesn’t seem to be doing much of anything. Whereas the very similar CosRX snail cream left my skin soft and bouncy, my skin feels very much unchanged after using this essence. I suppose it does add a bit of hydration, but not enough for me to use it as a hydrating product.

I also noticed that when I use this essence, I tend to develop clusters of small pimples around my nose area and mouth, which is not an area I’m prone to breakouts. These bumps clear up quickly, but they quickly clear up when I stop using this essence. This is especially puzzling because I do not have any issues with the CosRX cream and the two products are extremely similar in their composition. There are a total of 2 ingredients in the essence that are not in the cream (if anyone is curious, these are butylene glycol and 1,2-Hexanediol), so I was very surprised to be getting breakouts from the essence. My theory (I’m not a biologist – this might be utter nonsense) is that something about the slimy texture doesn’t sit well with my skin.

Everyone’s skin is different, but on my skin this essence does not seem to do much of anything except to give me minor breakouts. This is totally bizarre and exceptionally disappointing considering how much I love the sister cream to this product. 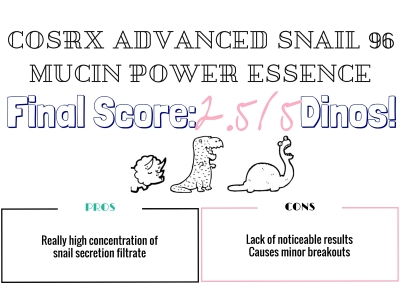 Disclaimer: This product was purchased by me. This post contains an affiliate links. Purchasing an item through an affiliate link does not add any cost to the customer but does help support this site’s upkeep.