UPDATE: To see a review and comparison of the 2017 Biore Aqua Rich Watery Gel and Essence, see here.

I’m posting about these two sunscreens together because they’re almost identically named. Despite that, they’re actually quite different but both very excellent.

Gel and essence, side by side. Pardon the awful state of my nails.

The textures of these two sunscreens are fairly different. The gel is very watery whereas the essence has still watery but also creamy texture. Both smell vaguely of citrus, which is strange but so faint it’s hardly worth mentioning. 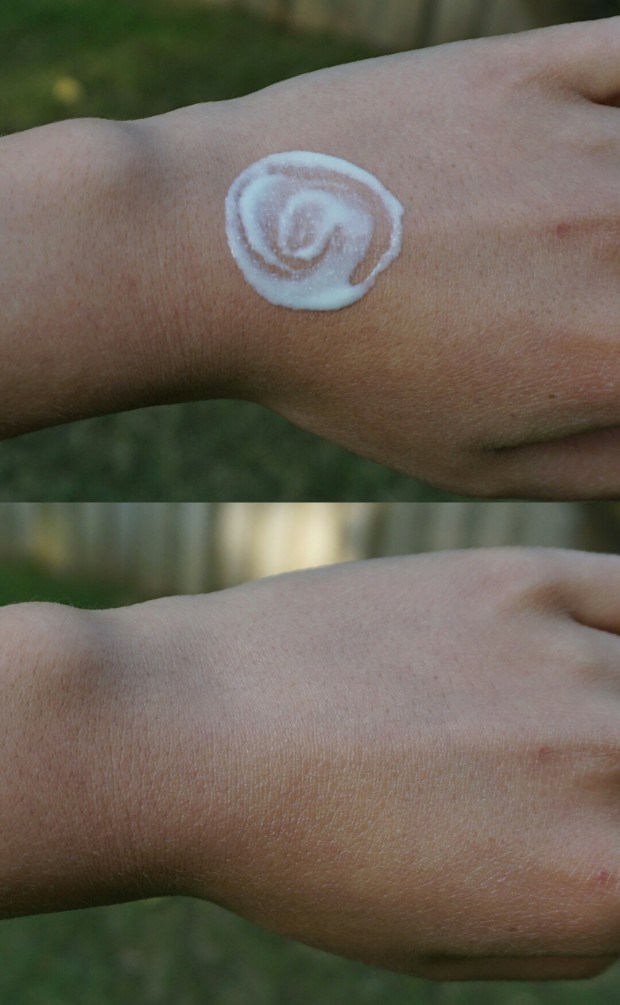 This is the gel. Notice the tiny white specs in the top photo.

Out of the bottle, the gel initially has little flecks / clumps of white in it. This concerned me at first, but those concerns were entirely unfounded as the clumps entirely dissolve with even the most minimal of rubbing.

Gel on left, essence on the right. The essence comes out of the bottle looking like a light, creamy moisturizer (top photo) but gives way to a watery, very spreadable consistency.

Comparison of the two creams on my arm in the photo above.

The ingredients are below, side by side, with acne triggers and irritants per cosdna noted:

The essence is 100% chemical whereas the gel also contains titanium dioxide, so it seems to use a combination of chemical and physical UV blockers.

These two sunscreens are both outstanding. The essence feels like a more luxurious product, just because the texture is so beautifully creamy (even though it’s quite watery) when it comes out of the tube. It does not feel like a sunscreen product, which I think is a huge part of its appeal. The gel feels more like a sunscreen to me, probably because the consistency is more similar to that of the Nivea Sun Protect Aqua Gel that I’ve been using for years, but I actually prefer the gel over the essence in terms of texture. The extra watery-ness allows for VERY FAST application. It also absorbs quickly and fully, definitely outperforming the essence. If you apply a small amount of the essence, it seems to absorb instantaneously. However, I am very heavy handed when applying sunscreen (especially now that I’m using acids to exfoliate) and find that when using the recommended 1/4 of a teaspoon of sunscreen for my face (not including neck or ears), the essence does not seem to fully absorb. It does not make my face shiny, nor does it feel heavy on my face, but if I touch my face, there’s definitely a layer of product sitting on top of my skin. I do not have the same problem with the gel. The gel is a little bit shinier immediately after application (probably due to the titanium dioxide), but the shine goes away quickly and afterwards, I can’t even tell I’m wearing sunscreen.

Final thoughts: Overall, two very excellent sunscreens. Both offer excellent UVA and UVB protection without any sort of white cast or shininess. I prefer the gel to the essence because I find it to applies easier and absorbs more fully. It’s also cheaper, which is an added plus!